Charlestown is the oldest neighborhood within the city of Boston, Massachusetts, United States. [1] Originally called Mishawum by the Massachusett tribe, it is located on a peninsula north of the Charles River, across from downtown Boston, and also adjoins the Mystic River and Boston Harbor waterways. Charlestown was laid out in 1629 by engineer Thomas Graves, one of its earliest settlers, in the reign of Charles I of England. It was originally a separate town and the first capital of the Massachusetts Bay Colony.

Charlestown became a city in 1848 and was annexed by Boston on January 5, 1874. With that, it also switched from Middlesex County, to which it had belonged since 1643, to Suffolk County. It has had a substantial Irish-American population since the migration of Irish people during the Great Irish Famine of the 1840s. Since the late 1980s, the neighborhood has changed dramatically because of its proximity to downtown and its colonial architecture. A mix of yuppie and upper-middle-class gentrification has influenced much of the area, as it has in many of Boston’s neighborhoods, but Charlestown still maintains a strong Irish-American population and "Townie" identity.

In the 21st century, Charlestown’s diversity has expanded dramatically, along with growing rates of the very poor and very wealthy. Today Charlestown is a largely residential neighborhood, with much housing near the waterfront, overlooking the Boston skyline. Charlestown is home to many historic sites, hospitals and organizations, with access from the Orange Line Sullivan Square or Community College stops or the I-93 expressway. 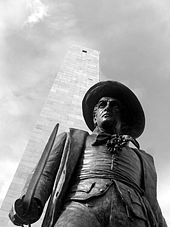 Thomas and Jane Walford [2] were the original English settlers of the peninsula between the Charles and the Mystic. They were given a grant by Sir Robert Gorges, with whom they had settled at Wessagusset (Weymouth) in September 1623 and arrived at what they called Mishawaum in 1624. John Endicott, first governor of Massachusetts Bay Colony, sent William, Richard and Ralph Sprague to Mishawaum to lay out a settlement. Thomas Walford, acting as an interpreter with the Massachusetts Indians, negotiated with the local sachem Wonohaquaham for Endicott and his people to settle there. Although Walford had a virtual monopoly on the region’s available furs, he welcomed the newcomers and helped them in any way he could, unaware that his Episcopalian religious beliefs would cause him to be banished from Massachusetts to Portsmouth, New Hampshire, within three years.

Originally a Puritan English city during the Colonial era, Charlestown proper was founded in 1628 and settled July 4, 1629, by Thomas Graves, Increase Nowell, Simon Hoyt, the Rev. Francis Bright, Ralph, Richard and William Sprague, and about 100 others who preceded the Great Migration. John Winthrop’s company stopped here for some time in 1630, before deciding to settle across the Charles River at Boston. 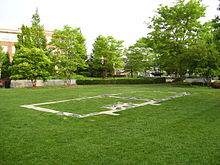 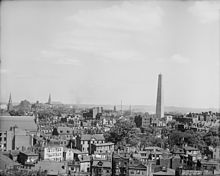 The territory of Charlestown was initially quite large. From it, Woburn was separated in 1642, [3] Malden in 1649 (including what is now Melrose and Everett) [4] and Stoneham in 1725. [5] South Medford, the land south of the Mystic River (now surrounded by Somerville), was known as "Mistick Field" and was transferred from Charlestown to Medford in 1754. This grant also included the "Charlestown Wood Lots" (the Medford part of the Middlesex Fells), and part of what was at the time Woburn (now Winchester). [6] Other parts of Medford were transferred to Charlestown in 1811. Still-rural Somerville was split off in 1842 as Charlestown was urbanizing. Everett, Burlington, Arlington and Cambridge also acquired areas originally allocated to Charlestown. [7] Landfill operations eliminated the narrow Charlestown Neck that connected the northwest end of the Charlestown Peninsula to the mainland at Sullivan Square.

On June 17, 1775, the Charlestown Peninsula was the site of the Battle of Bunker Hill, named for a hill at the northwest end of the peninsula near Charlestown Neck. British troops unloaded at Moulton’s Point [3] and much of the battle took place on Breed’s Hill, which overlooked the harbor from about 400 yards off the southern end of the peninsula. The town, including its wharves and dockyards, was almost completely destroyed [8] during the battle by the British. [3] The town was not appreciably rebuilt until the end of hostilities but, in 1786, the first bridge across the Charles River connected Boston with Charlestown. [3] An 87-acre (35 ha) Navy Yard was established in 1800; Charlestown State Prison opened in 1805. [3] The Bunker Hill Monument was erected between 1827 and 1843 using Quincy granite brought to the site by a combination of purpose-built railway and barge. Notable businesses included the Bunker Hill Breweries (1821) and Schrafft’s candy company (1861).

Around the 1860s an influx of Irish immigrants arrived in Charlestown. The area long remained an Irish and Catholic stronghold similar to South Boston, Somerville, and Dorchester, to the extent that the informal demonym "Townie" continues to imply the working-class Irish, as opposed to newer immigrants.

During the Civil War, over 26,000 men joined the Union Army and Navy at the Navy Yard, which was also responsible for constructing some of the most famous vessels of the conflict: the Merrimack, the Hartford, and the Monadnock. [9] Following the war, the city commissioned Martin Milmore to construct its civil war memorial, dedicated in 1872 [3] and still standing in the community’s Training Field. [10]

The city developed a water supply from the Mystic Lakes [11] and, on October 7, 1873, a vote was held to determine whether Charlestown should leave Middlesex County and join Boston as part of Suffolk County. Out of its 32,040 residents, [8] 2240 voted in support of the merger and 1947 opposed. Boston residents also approved the question, 5,960–1,868. [12] Charlestown’s separate city government was dissolved the next year. [8]

During the early 1960s, the city initiated plans to demolish and redevelop sixty percent of the housing in Charlestown. [13] In 1963, the Boston Redevelopment Authority (BRA) held a town meeting to discuss their development plans with the community. The BRA’s dealings with Boston’s West End had created an atmosphere of distrust towards urban renewal in Boston, and Charlestown residents opposed the plan by an overwhelming majority. By 1965, the plan had been reduced to tearing down only eleven percent of the neighborhood, as well as the removal of the elevated rail tracks. [14]

Throughout the 1960s until the mid-1990s, Charlestown was infamous for its Irish Mob presence. Charlestown’s McLaughlin Brothers were involved in a gang war with neighboring Somerville’s Winter Hill Gang, during the Irish Mob Wars of the 1960s. In the late 1980s, however, Charlestown underwent a massive Yuppie gentrification process similar to that of the South End. Drawn to its proximity to downtown and its colonial, red-brick, row-house housing stock, similar to that of Beacon Hill, many yuppie and upper-middle-class professionals moved to the neighborhood. In the late 1990s, additional gentrification took place, similar to that in neighboring Somerville. [ citation needed ] Today the neighborhood is a mix of yuppies, upper-middle-class and middle-class residents, housing projects, and a large working-class Irish-American demographic and culture that is still predominant. [ citation needed ]

One of the oldest neighborhoods of Boston, Charlestown is home to the Bunker Hill Monument and historic Charlestown Navy Yard. [15] Charlestown today is a mainly residential neighborhood with an institutional presence. Major institutions include Bunker Hill Community College, Spaulding Rehabilitation Center, and a facility of Massachusetts General Hospital. The Navy Yard, home to USS Constitution, is now part of the Boston National Historical Park, which marks the southern edge of the neighborhood. The waterfront has two marinas, Constitution Marina and Shipyard Quarters Marina. 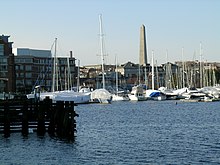 Charlestown is located north of downtown Boston on a peninsula extending southeastward between the Charles River and the Mystic River.

Thompson Square is located at the confluence of Main Street, Dexter Row, Green Street, and Austin Street. It was also formerly a stop on the Charlestown Elevated.

A small portion of Charlestown is north of the Mystic River, containing the northern approach to the Malden Bridge and now the entrance to Encore Boston Harbor (which made jusrisdiction over the casino a matter of dispute). This land was formerly a peninsula, but landfill has more completely connected it to the mainland of Everett. [16] This boundary was part of the original 1649 separation of Malden from Charlestown, where the Penny Ferry [17] operated at the time; the first bridge opened on the site in 1787. [18]